Ham Mousse has been a long time coming.

We were first drawn to this recipe a few months back when, on flicking through the book, my mother-in-law exclaimed: “But, that looks like a penis.” My mind was filled with questions – “Which bit looks like a penis? Which bit of a penis?” – none of which I asked because I wanted to be able to look my father-in-law in the face at some point in the future.

So Ham Mousse was put on the list, and then once Alice had had broken the “food that looks like a penis” barrier with Banana Candle, it moved to the top.

Ham Mousse called for one of the most unpleasant tasks thus far in our Bad Jelly adventures: pushing blended ham through a sieve.*  There wasn’t much more to it other than blending, sieving, mixing in gelatine and then popping in a mould to be “decanted” (this is our fancy term we have coined for getting stuff out of moulds).

We then needed to make the accompaniments, and were momentarily thrown by the fact there were no recipes provided for the pink and green piped eggs next to the ham mousse. But no matter. We decided we had enough Bad Jelly experience under our belts to guess the ingredients, and so mixed together mayonnaise, cream cheese, flour, water, cream and food colouring to create something that looked good even if it wasn’t edible**.  And if I do say so myself, we did a bloody good job of the piped eggs, ham and parsley stick things and decorative ham shapes.

Matching up to the picture: 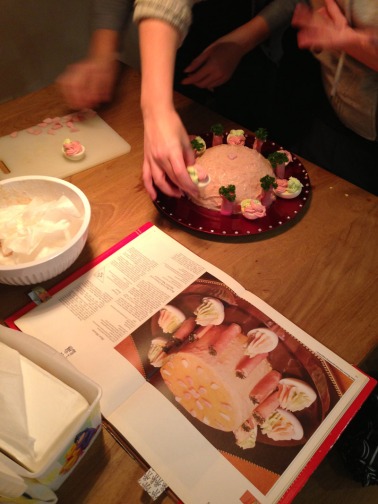 The final verdict? Actually not too bad. No-one went back for seconds but I didn’t spit it out which is a big step forward. It still tasted a bit like ham, and I could definitely imagine this being put in sandwiches for the 1970’s school lunchbox.

*Thanks to Bridget, who “volunteered” for this and had to fight off the cat (who was pretty sure that sieved ham mousse was for him) the entire time.